emWin is designed to provide a read-to-use, efficient, processor- and LCD controller-independent graphical user interface (GUI) for any application that operates with a graphical LCD. It is compatible with single-task and multitask environments, with a proprietary operating system or with any commercial RTOS. emWin is shipped as "C" source code. It may be adapted to any size physical and virtual display with any LCD controller and CPU. 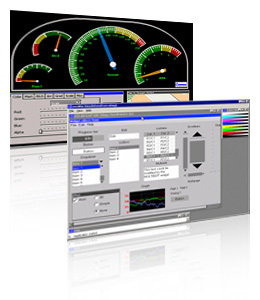 Widgets (window objects, also known as controls) are available. They generally operate automatically and are simple to use.

The window manager supplies a set of routines which allow you to easily create, move, resize, and otherwise manipulate any number of windows. It also provides lower-level support by managing the layering of windows on the display and by alerting your application to display changes that affect its windows.

A dialog box (or dialog) is normally a window that appears in order to request input from the user. This widget is included in the Window Manager/Widget package which is optional.

Touch screen support for analog touch panels is available. This includes a low level driver,which handles the analog input (from an 8 bit or better AD-converter), debouncing and calibration of the touch screen. The window manager deals with touch messages and widgets such as button objects. It takes no more than one line of code to create a button or another widget, which then automatically handles touch messages and reacts accordingly. * For window objects such as the button widget, emWin offers touch-screen and mouse support.

Memory device contexts allow creation of a section to output to the display in the memory of the CPU. All drawing operations can be used. When the image has been build completely, it is transferred to the display in a single operation, allowing flicker free updates even with slow CPUs or slow displays.

VNC stands for "Virtual Network Computing". It is, in essence, a client server system based on a simple display protocol which allows the user to view a computing 'desktop' environment not only on the machine where it is running, but from anywhere on the Internet and from a wide variety of machine architectures. Client and server communicate via TCP/IP. emWin VNC support is available as a separate package.

A display driver supports a particular family of display controllers (typically LCD controllers) and all displays which are connected to one or more of these controllers.

Antialiasing is the smoothing of lines and curves. It reduces the jagged, stair-step appearance of any line that is not exactly horizontal or vertical. emWin supports dif- ferent antialiasing qualities, antialiased fonts and high-resolution coordinates. It is an optional package.

A simulation environment under MSVC++ is available. It can be used to write and test the entire user-interface on the PC (all routines are 100% identical to your embedded application, no matter what CPU or LCD you are using).

The touch screen simulation is integrated into the regular emWin simulation. Mouse events are used to simulate the touch screen. The simulation can be used to write the user interface of your application and can be send as a simple exe file to anybody for discussion, demonstration or verification.